The Rhodesian Ridgeback has been born and bred in Africa with natural skills of an outstanding hunter who used to prey on lions, bears and big animals.

A ridge of hair, running down his spine to the opposite direction, gifts him the title ‘Ridgeback’. He has a mind of his own meaning his streak of independence.

Nowadays, the rough edges of their character has undergone tremendous changes making them wonderful family pets. This dog is just enough for handling any marauding intruder into your home. Huge exercise demand, instinctive prey drive and automatic protective intuitions build up a Rhodesian Ridgeback.

This large dog comes up with immense power and sound intelligence. He possesses a dignified appearance and even temper. This is especially a dog not to mess up with. His sky high prey drive will not let anything go unanswered. Athleticism is an innate trademark of this muscular beast. He can swiftly run for miles as well as excel in dog sports.

However, he is going to be satisfied with strikingly little amount of exercise. Barking is quite absent in their character. They will throw themselves into a situation prior to giving any shout outs. This dog will remain quietly active the whole of his lifetime.

As a stranger, you will receive little favor from the Rhodesian Ridgeback. They are never into the business of an alien person. To many of its admirer’s surprise, this robust dog acts in a sedate manner within the family. He might be considered as one of the best kid friendly dogs ever.

Not to forget, first time dog owners will face some hurdles handling the Rhodesian Ridgeback. You are going to deal with a confident canine who thinks he understands the situation.

This dog comes in a package that includes both positive and negative aspects. Smartness is of course one of his best traits. He scores the highest in his grounds of expertise such as hunting, accompanying or guarding the family, sports sessions, etc. Professor Stanley Coren puts him on the 52nd position in his dog intelligence list.

However, such an overall estimation reflects little on his qualities. This dog is fearful of nothing and bears a fearsome prey drive. He behaves in a gentle way with his closed ones. He holds up a level headed temperament. This dog rarely disturbs your peace with nonsense actions and speeches.

In a word, Ridgeback people gets exactly what they want from this dog.

Food amount is truly a dynamic issue and there will always remain a difference in amount from dog to dog. This quantity actually relies on age, sex, activities, health and so many other aspects of an individual dog.

The Rhodesian Ridgeback can finely adjust itself with both homemade and commercial products as long as they fulfill his energy necessities. You can feed him large sized dog foods. You just should not free feed the dog. It brings forth some bad outcomes such as wasting and obesity.

Rhodesian Ridgeback meals should be rich in protein and fat ingredients. At least, 18-26 percent of proteins in each meal will provide him with ample energy.

Beef, chicken, fish, turkey, eggs, dairy items and lamb are excellent sources of proteins. Barley, cereals, vegetables and oats will give him some plant proteins.

But vegetable proteins are not proficient in amino acid which is vital for the health of a dog. On the other hand, flaxseed oil, safflower oil, olive oil and fish oil will supply the dog with necessary fat. Fat prevents an injury by protecting the internal organs by setting up a protective layer. Bone and joint strength also derives from it.

Tapioca, brown rice, sweet potatoes, fruits, beetroot, pumpkin and vegetables serve him with carbohydrates and fibers. Carbohydrate is the source of long term strength. Vegetables should not go beyond 1-2% of his total diet.

A commercial item has to be free of preservatives, dyes and flavors. In this context, you may want to follow the guidelines set by the Association of American Feed Control Officials (AAFCO). Clean water is a vital requirement for the dog.

Irrelevant use of treats causes overweight which is a great concern for the Rhodesian Ridgeback. You have to be careful in this respect.

The Rhodesian Ridgeback does not call for too much grooming attention from you. He has an easy care coat. His coat does not shed too much unless it is a season.

Moreover, this dog is completely odor free making him a top candidate among people who dislikes tending to too much grooming.

So, he can deal with less frequent baths. A weekly brush is just fine for him. Trim the nails and brush his teeth regularly. A weekly inspection into his ears is okay with this hunter. You can take the dog to a vet for a yearly thorough health checkup. Keep him on the leash while going out. His robust prey drive is a force to reckon with.

The Rhodesian Ridgeback requires at least an hour of physical exercise. A couple of daily walks will get his temperament under control. This dog is an all-round performer when it comes to physical workouts.

So, you have tons of options to choose from. He can run, swim, hike, walk, track, hunt and so on. Make him your hunting partner. He will never discriminate between a rabbit and a bear because of an indomitable prey drive.

He is also good at interactive games such as frisbee, flyball. Agility, obedience, rally and lure coursing and these are excellent ways of exercising your dog.

The Rhodesian Ridgeback is essentially a large dog with a lot of intelligence and hunting instincts. Their strong willed nature asks for patience on your side.

So, socialization has to top the list of training programs. Even a well socialized dog will not allow a free pass to the stray cat on the backyard. He will run after a cyclist, a bunny and no matter what a car. He maintains a safe distance from a stranger due to shyness as well.

Socialization cues should be on the daily agenda in order to keep his crude self at bay. He is a devoted family companion once you feed him enough lessons in this respect.

Leash training is vital for the dog. It will help you control this big dog in future occasions. Introduce the crate at its puppyhood. He will learn the basics of house training like timing and location while he is remaining confined. The crate is going to give him a place of his own too.

So, he can handle separation issues more tactfully. However, you should not keep an adult dog inside for more than 2-4 hours at a stretch. Not to forget, hunting training can further whet his skill sets.

The Rhodesian Ridgeback is a cross between African native dog of the Khoikhoi people and some European dogs such as the Greyhound, Bloodhound and Mastiff.

The Khoikhoi had an excellent hunting dog which attracted the eyes of the Dutch colonialists. These people were native to South Africa and Namibia. The Boers took enough interest to mix the native dogs with European breeds. Thus the new dog came out to be a champion of the African hot climate and rough terrain.

Zimbabwean or the then Rhodesian hunting master Cornelius van Rooyen traced out that this ridged dogs show superior performance against the lions. These events were taking place in the 19th century Zimbabwe. The standardization of this dog was completed in the early 20th century.

The AKC came to recognize the Rhodesian Ridgeback as a distinct breed in 1955. This dog now ranks the 41st in the AKC breed popularity list. 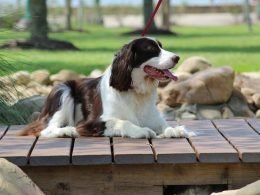 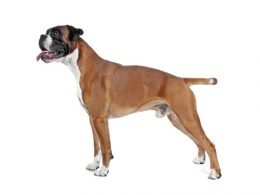