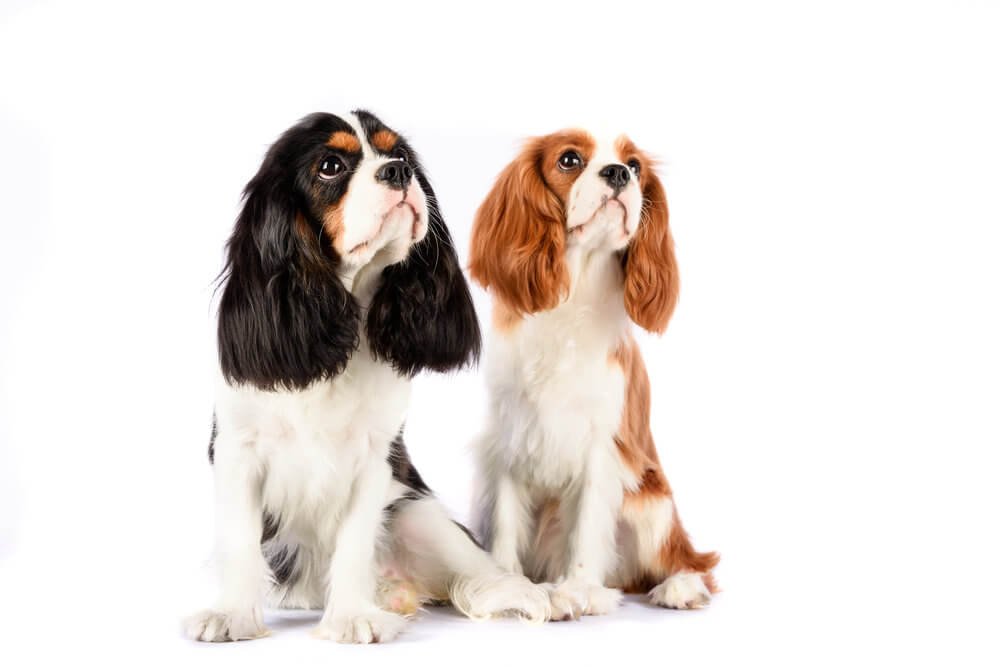 In This Article Dogsculture Covers:

The Cavalier King Charles Spaniel is one of the largest among the toy dogs. He has got the best of a small dog and a touch of a medium sized dog. This is an immaculate companion hunting for every chance to snatch your lap. You can never underestimate a Cavalier King capacity.

He is an awesome athlete, probably no. 1 enemy of the birds in the neighborhood, sporty and enthusiastic. What more to ask if you have such an all conquering dog by your side.

The Cavalier King Charles Spaniel is unequivocally a companion dog. They are going to stay close to you with love and affection.

Whoever he meets, he must greet. There is no enemy to this dog because of his sociability. He loves just everyone because of his easygoing character. His sweet nature makes him a constant contender among top popular dogs.

Most of the time, your dog will try on something. So, a sedate dog is rather uncommon among this breed. This is a people oriented pet who will prefer staying with the family and is considered to be an outstanding family dog.

Older children suits him better. Small kids are likely to pull his large ears and thus earn his anger. He is a kid friendly dog as long as personal things remain personal. Awkward kids will never allow it.

So, there will be a constant friction. They are not active watchdogs and can never be relied upon for stranger announcement. If they have a chance, they will get introduced with a burglar than warning you of his presence. In short, this is an incredible dog for companionship.

However, barking is not uncommon to them. But it happens mostly without any aim. Round personality depends upon their parents’ qualities as well.

The Cavalier King Charles Spaniel possesses an average smartness. He is the smartest dog on the block when he is with you.

Professor Stanley Coren puts the Cavalier on the 44th position in his dog intelligence list. He knows the exact art of occupying your attention and the lap. They can be cooperative and good dogs. This is an outgoing dog and he is the happiest while taking a stroll. He is also a smart bird chaser. He loves to trail any moving object including street cars.

You will identify both patience and intellect when he is hot on the heels of a bird. But when it comes to training, you are going to have a tough test. Structured learning scares them a lot.

Their temperament might also show a streak of stubbornness which is usually bad for a family dog. On the other hand, Cavalier King is a superb performer in obedience and agility shows.

Dog food quantity relies upon his health, age, sex and so many other aspects. You are going to learn all the requirements as you continue your life with the Cavalier King.

As a rule of thumb you can give your adult dog 1 cup of high quality dog food. Usually, he needs this amount over two divided meals in the morning and in the evening whereas puppies should get 3-4 meals a day.

Indiscriminate feeding brings no good to him. This is a small dog and rapidly gains weight due to his love for food.

So, you got to be judicious in disbursing food items as well as treats. Put a cap on treat provision. This tasty appetizer gets the dog into a troubling physical structure. Proteins and fat are two vital elements of his diet. These items keep him going in terms of energy. Chicken, lamb, beef and fish are fine sources of proteins. You can feed him whole grains as well.

Sweet potatoes, tapioca, oatmeal and brown rice are some of the suitable whole grains for a Cavalier King Charles Spaniel. These items will fulfill his requirements of carbohydrate and dietary fiber.

Fish oil and Omega-3 fatty acid will take care of his skin, coat, eyes and brain. You should provide him with ample fresh and clean water.

The Cavaliers are subject to some major health issues. But it is not mandatory that your dog should suffer from either one of these diseases. Most of the time, health screenings can weed out the biggest diseases from the list.

You can immensely benefit from a certificate by the Orthopedic Foundation for Animals (OFA) and the Canine Eye Registry Foundation (CERF). Hip, patella, ophthalmological and cardiac evaluations can keep him on the safe side. Mitral valve disease takes place in his heart causing murmurs.

Ultimately, it leads to heart failure. Then, there is a neurological issue titled syringomyelia pioneering to a mild pain and in some acute cases even paralysis is a possibility. Patellar luxation results in a misfitted kneecap. His movement is severely affected in this condition.

Eye issues range from cataract to dry eye. Lack of tears in tear glands will affect his normal ocular functions. Blindness is the outcome of dry eye if the dog is not treated properly. Hip dysplasia is an inappropriate joint of the femur and the hip. It will also restrict his movement and the final solution to this problem often lies in a surgery.

The Cavalier King Charles Spaniel has an extravagantly silky and wavy coat at his disposal. Despite large hair, you will not face any difficulty in conducting multiple brushing as it does not hinder your grooming efforts. Brushes will run smoothly through his coat and you can easily reach his skin.

A bristle brush is going to serve his coat well. Hair in the ear and leg areas tend to mat and demands special care. A slicker brush or steel comb can deal with those mats.

Brush him 2-3 times every week. You do not need to bathe him frequently. Yearly 3-4 baths are just fine for his general care. You have to trim his nails and clean the ears regularly.

Especially, his long ears should be checked weekly as well as after a bath so that you can immediately identify any stinky smell or discharge. Brush his teeth 2-3 times a week. Check his eyes for redness or dryness. Use a headband to pull back his ears while he is having meals. It will protect the ears from getting dirty over and over again.

But the truth is not that simple. His Spaniel ancestors have gifted them with awesome athletic qualities. They can endure exercise programs and you should take them out for at least ½ to 1 hour of walks. It will keep him mentally jolly and physically fit. Puppies do not need any specific schedule. This routine is strictly applicable to an adult dog.

You can set them on sports too. They are good at obedience and agility tests. A fenced backyard will also make sure that he does ample physical activities all by himself.

But a regular walk with you must be an obligatory function for him. This dog is notorious for hours of inanimate sitting on the couch. Scent work and hunting are two of their hobbies. They should be leashed while outside as many of them will follow their nose instead of your commands.

In this respect, hand signal training can benefit you both.

Their training has two aspects for your consideration. They are hell bent on pleasing you. But their intelligence is somewhat average.

So, your patience and going with the flow attitude is the key to a perfect training. They appreciate good treats more than you think. Go, get some of the tasty treats and experience a few wonders.

Praise his good achievements lavishly. You should remember that he is trying his best. His amicable nature makes socialization an easy task. He is always looking forward to meeting new people and animals which makes him a topnotch therapy performer.

As a result, you will easily have an outgoing dog with simple application of a few tricks. Obedience and agility are his specialty and you can train him for these jobs. Gentle, loving and affectionate nature gives you little solace if he is not adept in basic commands. Teach him the ins and outs of simple orders.

Toilet training is another huge issue for the Cavalier Kings. They should be acquainted with the idea of performing their personal business at a certain location as soon as they come home. Introduce him to the crate and make it cozy.

It will give both of you some personal time. The crate will gradually teach him a few separation handling skills as well.

Spaniels took their name from Spain and they have been around for hundreds of years. English, French and Scottish courts had a liking for this dog.

Even in the old days, these dogs were reputed for their excellent companionship. Artworks, from the 16th to 18th century, depict a similar dog in the then royal courts.

But the Cavalier King Charles Spaniel is especially grateful to King Charles I and King Charles II because of their immense interest in this breed. The name of both the kings has been sanctioned to the dog. We can see that Queen Mary of Scotland was also fond of spaniels. British aristocrats held on to their fascination even in the 19th century.

The spaniels, as we know them today, are the results of hard labor from British dog lovers. Their endeavor throughout the 19th century yielded excellent results.

These dogs were first showcased in 1928 in the Crufts Dog Show. The Kennel Club (UK) accepted this dog as a distinct breed in 1945 and the AKC was a bit late to do so in 1995.